Redefining the future of social media usage with Blockchain assets

Helios, funded by the European Commission under the H2020 Programme, has developed an open source platform that facilitates the creation of social networking with specific modules and functions.

According to the Digital 2021[1] report, the latest trends suggest that more than half of the total population, 57%, is using social networks, representing approximately 4.48 billion users.

Even if traditional social networking applications have managed to gain a solid foundation, there are two major challenges to overcome:

To address these social networking challenges, Helios, funded by the European Commission under the H2020 Programme, has developed an open source  platform that facilitates the creation of social networking with specific modules and functions that give users control over their privacy, ownership and sharing of personal data and/or content generated on social networks.

As it can be seen on below architecture, the Helios open source platform is composed by the Helios Core, Extension Modules, and Applications. The platform offers developers the possibility to create new decentralised apps or extension modules to offer additional features on top of the Helios core components. For more information about the platform, please, access here. 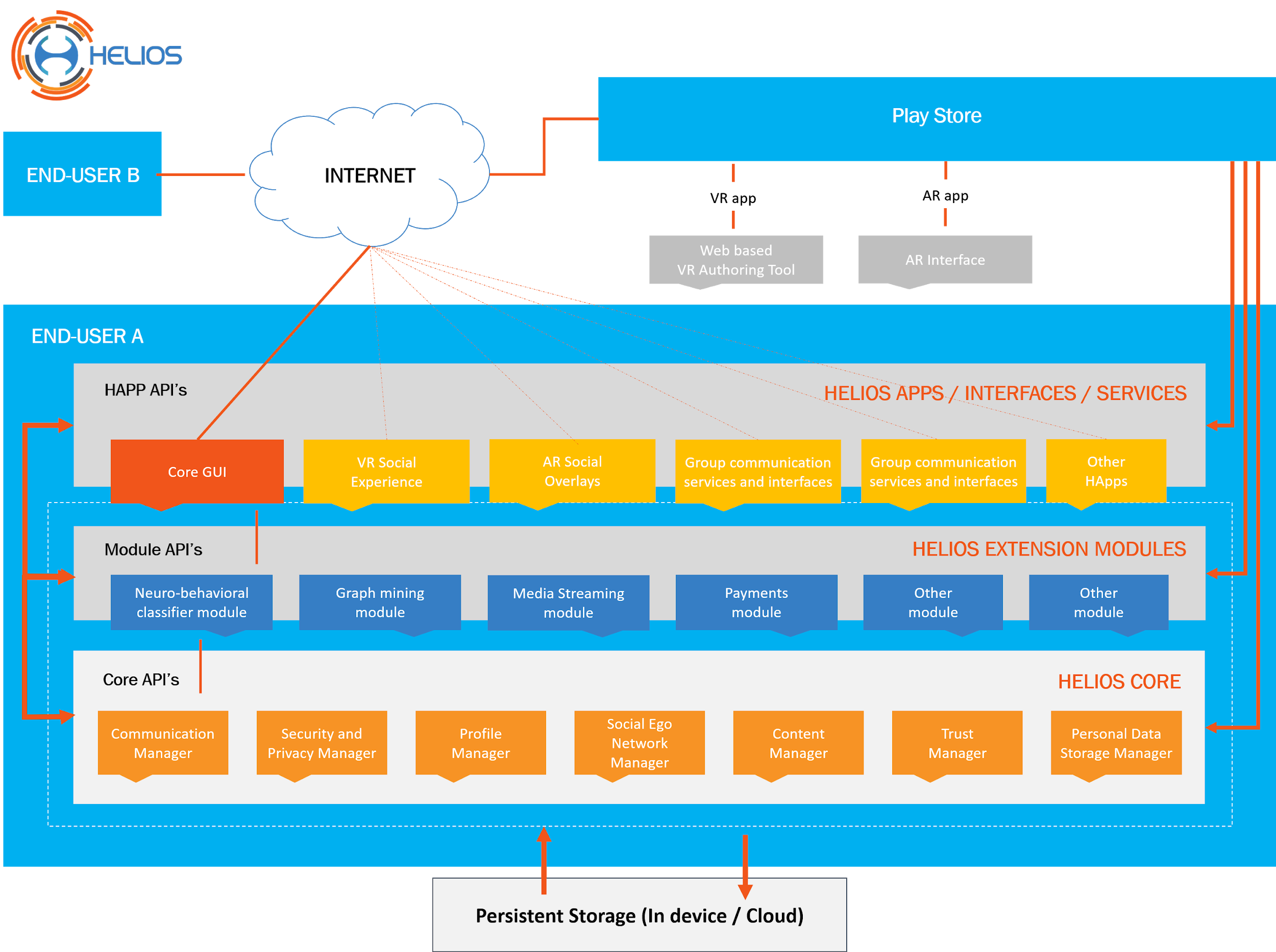 The project started in January 2019, for a duration of three years, with the participation of the European Commission, and that of 15 partners from several EU Member States.

Worldline, as a partner specialising in Blockchain technology, has developed a decentralised reward module to provide an optimal reward system for the content and the activity generated.

The main function of the reward module is to incentivise and gamify social media users for their actions. Users can earn incentives, in the form of a fungible token (fractionable and exchangeable for a reward) and spend it on potential benefits as an exchange.

The Rewarding Module was piloted within the context of the Helios project, in one of the three use cases implemented in the context of decentralised social networking, with a mobile application called "Citizen Journalist". Through the app, amateur journalists were able to broadcast live stream videos and images in a decentralised manner and be rewarded for their content. The pilot took place in September 2021 in Switzerland at the Jungfrau Marathon.

The most beautiful Marathon of the world - Jungfrau Marathon Interlaken (jungfrau-marathon.ch)

How does it works?

The figure on the right shows the general layout of the Helios reward module:

1. A user performs an action that may be eligible for a reward (based on the predefined rules of the system).

2. The reward module manages the associated rules and incentives, confirms the rewardable action and at the end of the day applies the transfer of the corresponding tokens to the user's wallet.

3. On a daily basis, a pre-determined number of Helios tokens are generated, based on the total daily activity of all network users, to be distributed to those candidates who have contributed the most.

4. The tokens to be distributed to a user is determined based on how much they contributed to the network that day versus the rest of the active community. All rewards are made through the Quorum network via smart contracts.

5. The user can then spend the tokens earned to access to premium features or services.

For more information about the algorithm developed, you can access the following illustrative video

Users can collect rewarding tokens through the performance of activities and actions that are tagged as rewardable. These tokens can be collected in their mobile applications within a wallet module that will store the balance of tokens and the capability to transfer a partial or total amount to other users or to either access to premium features, content or to external services as a discount on the final price.

What is the Unique Value Proposition?

Token functioning is not complex. The algorithm implemented in the Rewarding Module can understandable by the average number of users and has been defined to be fair and transparent for each individual.

On the other side, it provides near-instant settlements between actors, multi-purpose utility for its expenditure and use and decentralized accountability.

Finally, it is GDPR compliant since the user identity is anonymous and only the public blockhain address is known.

To who it may be useful?

[1]Source: Digital 2021  WeAreSocial. Digital audiences swell, but there may be trouble ahead